Whether one’s preference is thin and crispy or deep dish, square or triangular cut, pizza is one food that brings families and friends together. But just where did this slice of heaven come from? Just like the numerous toppings available on a pizza pie, there are a number of thoughts on the origin of pizza.

Some historians date the pie back to ancient times. The Greeks, Egyptians and Babylonians all made a simple form using flat breads topped with herbs and olives, but some authorities say that the pizza as we know it didn’t come about until 1889.

That’s when Italian King Umberto I and Queen Margherita traveled to Naples, Italy. At that time, pizza was a food for the poor. But chef Raffaele Esposito was charged with creating a dish fit for royalty, so he crafted a pie topped with three significant colors symbolizing the Italian flag. The colors red, white and green were made with tomato, mozzarella and basil. Today we know this style of pizza as the margherita.

As Italians started immigrating to the United States, they brought a slice of home with them. Now the pizza pie is a food many of us can’t resist—and for good reason. The warm hand-tossed crust, the gooey cheese and the flavorful sauce make it one of the most popular foods in Columbus.

The pizza pie has come a long way since its humble beginnings. No longer is it just about cheese and pepperoni; oh, no! Gourmet pizza is sweeping the foodie scene and the topping choices are endless, because when it comes to pizza, there are no rules. The search for Columbus’ most mouthwatering pizzas turned up an amazing array of offerings from artisan and gourmet to everyday best sellers. Pizza lovers will be tempted by the variety the city has to offer. 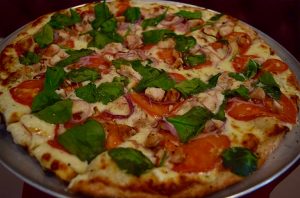 TAT Ristorante di Famiglia
Established in 1929 in Columbus
Most popular pizza: TAT Special
Most unique pizza: Alfredo Pizza, also known as White Pizza
Cool facts: Eighty-three-year-old Jimmy Corrova and his family still run the pizza restaurant that his father started. He says his shop is the oldest Italian-style restaurant in Columbus. And because he’s been in the businesses for so long, he’s seen many things about the pizza pie change over the years, including the price. He says back in 1956 he sold a large cheese pizza for $.90 and a large pepperoni for $1.25. And while those prices will no longer cover an entire pizza, Corrova says what has not changed is that when customers walk into his restaurant, they’re still treated like family. 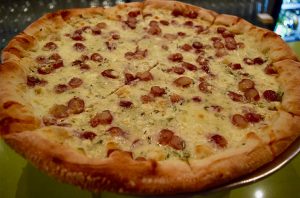 Pies & Pints
Established in 2012 in Worthington
Most popular pizza: Chicken Gouda
Most unique pizza: Grape & Gorgonzola
Cool facts: Owner Rob Lindeman says what makes Pies & Pints so unique is the bold flavors they use on their pizzas. “We do not play it safe with our pizzas,” he explains. It’s their uniqueness that won Pies & Pints a spot on the Cooking Channel’s special show “Pizza Outside The Box.” The Grape & Gorgonzola pizza made its national debut showcasing the flavors that dance in your mouth. Lindeman says, “Our pizzas give you the opportunity to try new culinary flavors on a familiar canvas.” The “Pizza Outside The Box” episode can still be seen on reruns. 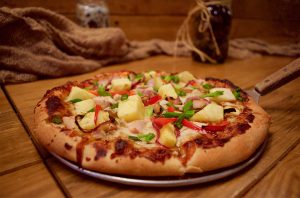 Local Roots
Established in 2009 in Powell
Most popular pizza: Carnivore Bliss
Most unique pizza: Teriyaki
Cool facts: Owner Jessi Iams tries her best to live up to her restaurant’s name. The experience here is truly farm to table. This means her pizza menu is constantly changing. She likes to use in-season local produce or ingredients that she can grow in her own garden. Even her pizza dough is made with eggs from her own chickens. She owns 28 of them. Another unique touch to the dining experience at Local Roots is that when it’s in season, fresh honey is available to dip pizza crust in. Jessi also owns her own bee hives, so she can harvest her own honey. 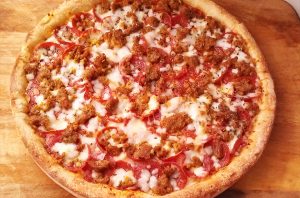 Massey’s Pizza Shop
Established in 1949, first location in Whitehall
Most popular pizza: Thin Crust Pepperoni
Most unique pizza: The Godfather Deep Dish
Cool facts: Pepperoni lovers will love this—there are 155 delicious slices of pepperoni on every large pepperoni pizza. Operations manager Richard Folk says Massey’s prides itself on generous toppings and pizzas made the authentic Italian way with no conveyor belts. But foodies don’t have to live in Columbus to enjoy it. Each year they ship about 2,500 pizzas packed in dry ice to customers who grew up with Massey’s and have moved away. “They’re looking for a slice of home,” says Folk. “They’re looking for their tradition. I call it ‘old school cool.’“ 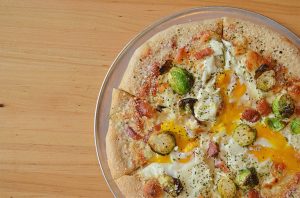 Forno Kitchen + Bar
Established in 2015 in Short North
Most popular pizza: Four Cheese
Most unique pizza: Breakfast Pizza
Cool facts: Forno is the Italian word for oven. The custom stone-fire oven is a prominent, eye-catching feature of this Short North restaurant. It’s where Forno’s delicious pizza pies are freshly baked. Once again, a Columbus restaurant is in the national spotlight. Because of the restaurant’s distinctive menu and contemporary atmosphere, Forno’s made the list of the 100 Hottest Restaurants in America by Forbes and OpenTable for the second year in a row. And here’s a sweet fun fact: happy hour features 1/2 off pizzas.