What started as a hunting trip with a buddy changed two men’s lives forever. In April of 2014, Tony Tanner, owner of The Butcher and Grocer, was hunting with a long-time friend who had been recently diagnosed with lung cancer. During their hunting trip, the two discussed how the food choices that people make can contribute to an increased risk of cancer cell development. Tony’s friend, who had never smoked a day in his life, felt that the harmful way food is processed contributed heavily to his cancer and weakened him in his fight with the disease.

Tony’s friend passed away later that year, and that loss started Tony’s journey to change his focus in life. He committed himself to finding out where his food came from, and he wanted to see what he could do to offer his community fresh, properly raised meat options. With only a sausage making course under his belt, Tony knew that he had a lot of research to do to get started.

Tony set out to open a neighborhood butcher shop and he began working on his business plan in mid-2015. Shortly after coming up with the plan, he took his daughter to a ranch in Montana for her 12th birthday. During their visit, he sat down with the rancher (who was a beef farmer) to discuss his plan and get his feedback. The farmer wasn’t sure if Tony could make it work, but he offered to put him in touch with some farming connections he had in the Athens, Ohio area.

“The biggest part was finding the farmers,” says Tony. He describes his search as a “big circle of weirdness.” He would connect with a beef farmer who then led him to a pig farmer. He met a lamb farmer while riding in the Pelotonia cycling event, and another agricultural connection led him to a poultry farmer and so on. Most of the farms from which he began sourcing are based in the Appalachian region near Athens, Ohio. Once he began to purchase from several of the farms, business boosted in the area and the farms and other businesses in the local towns in that region began to expand. 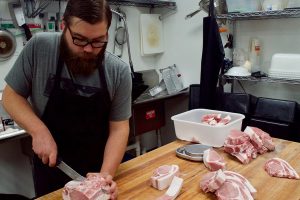 Tony works very hard to ensure that he wastes very little of any animal sold in his shop. “There is always a part that can be used by someone for something,” admits Tony. “We found we had little use for the remaining beef fat we had after trimming. We were able to source a local soap manufacturer who used the beef fat and combined it with peppermint and goat’s milk to make an amazing soap that we sell in the shop.”

As The Butcher and Grocer grew in its Grandview community, interest started to rise from local restaurant owners. It became the next logical step to supply meats to local restaurants that want to share in the same philosophy of quality, locally-raised meats. “The concept of my restaurant is to support local growers and have integrity with the meats we prepare for our guests,” says Moses Hayelom, owner of Flavor 91 Bistro in Whitehall, Ohio. Moses shares Tony’s philosophy and was thrilled to find a local butcher who could supplement his menu; however, this isn’t an easy role to fulfill. With a limited number of farms and animals on each farm, Tony is restricted in what he can offer to restaurants and when he can deliver. “Orders from restaurants need to be placed well in advance so that we can plan for the additional amount,” says Tony. 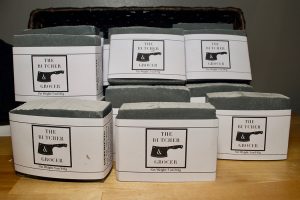 The staff at The Butcher and Grocer is small, but it fits the charm of this boutique butcher shop. Everyone has a role to fill and they fill it well. There are butchers, apprentices, sales people, management, finance, delivery and customer service staff. Many staff members fill multiple roles. Tony likes to be in front of the customers, whether he is behind the counter or delivering an order to a local restaurant. “I like to interact and get feedback on what more we can deliver or how we can do it better,” adds Tony.

Directly across from the chilled meat cases are shelves filled with locally-produced items from sources who share the same philosophy as Tony. These products include salsa, honey, pasta sauce, mustards, salts and spice blends produced by The Butcher and Grocer. Most of the items come from the same area in Athens where the meats are sourced. Tony feels a bond to this area and likes to support the local community there when he can. “The better this community thrives, the more opportunity there is for the farms to expand, which is good for me,” says Tony. 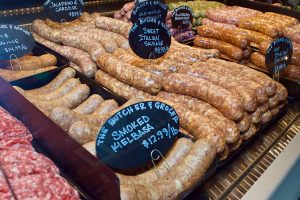 His goal is simple: “I want to feed people who are searching for quality, locally-raised meats.” Tony sees the future to be much the same as it is today. Things are getting tight in the shop, and he would like more space for butchering and a larger walk-in refrigerator for storing, but his core business will remain the same — a local, retail butcher shop. He will continue to work hard to provide his customers with flavorful meats, always raised responsibly.