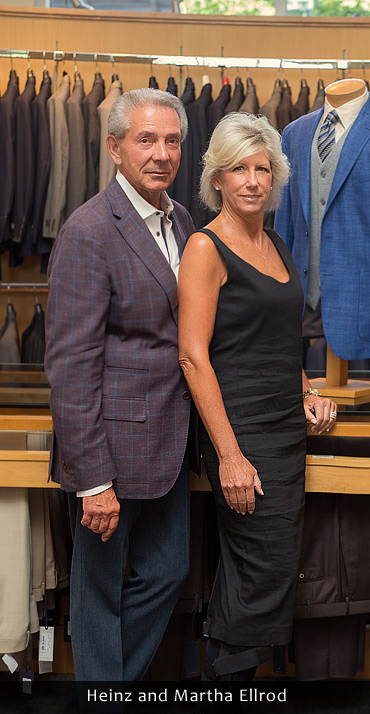 What year was your company established?
Godfrys Men’s and Women’s Clothier was opened in 1981.

How did you get started?
Heinz was an army brat living in places like Panama, Germany and Texas before he finally settled down in Columbus. Heinz worked hard and did odd jobs all his life. He started Godfrys in 1981 with financial backing from Tom Williams, and in 1988 he purchased the business outright to become the sole owner.

Martha moved to Columbus from Cleveland in 1980 to attend Otterbein University. She graduated in 1984 and began working as a cashier at Godfrys.

The store opened at the Lane Avenue Shopping Center and remained there for five years before moving to The Worthington Mall where business continued to grow for another twenty-two years.

After adding a women’s clothing line, the shop expanded in 2008 and moved to its current location at Polaris, where it has been for ten years.

What makes your shop unique?
We like to offer a unique retail experience in Columbus. Our mix of merchandise, personalized service and customer relationships set us apart. When we built this store the Italian designer Ermenegildo Zegna built a shop-in-shop, the first of its kind in the United States.

A few years back we also added The Custom Club, a made-to-measure shop for all of your made-to-measure needs, personalized just for you. Enjoy a cocktail while you go through hundreds of swatches and different linings and buttons.

What would you like potential customers to know about your business?
We are the finest specialty store in Columbus carrying European fashions exclusive to the area. We have stayed true to our merchandise mix, catering to discerning men and women of Columbus. We are honored to continually be nominated as one of the finest retail stores in the country by Esquire magazine.