Rosie the Riveter, 1940’s cultural icon, signaled that women had a role in the workforce. Though more specifically white women, Rosie sounded the bells of empowerment that sparked a movement that proclaimed a woman’s place was where she chose, shattering the notion that her place was confined to the kitchen.  She was the picture of progress that emboldened women to roll up their sleeves and step into the workplace.

In 1930, 44% of women of color were employed outside of their home, more than twice the 21% share of white women who did the same, according to the US Census Bureau. The jump in women working between 1940 and 1950 was much larger for white women than black women as the contributions of 600,000 of these women were hidden by race, which proved to suppress the empowering images and heroic stories that would have given more hope to young little girls who looked like me. Yet, these 600,000 women of color triumphed over racism and sexism to help win the war and create job opportunities in industry, government, and administrative services for themselves and future generations. 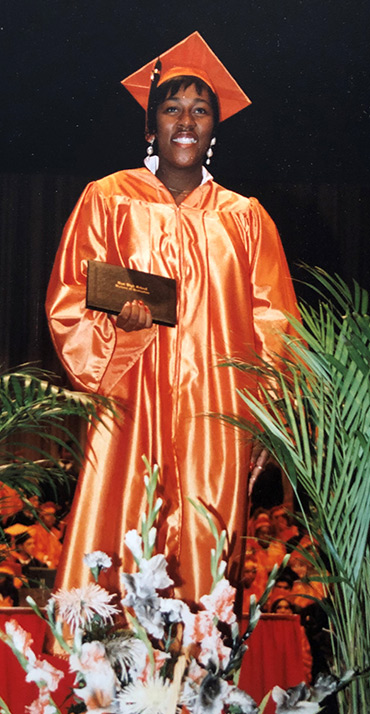 Black women have a long history of essential work in the United States. They have toiled in hot fields, cared for other people’s children, cleaned homes, worked in factories, taught in poorly funded schools, fought for equality, and made it all look easy in the process. But they remained largely hidden figures. Women like my great grandmother and her great grandmother have been in the American workforce – by choice or by birth – for hundreds of years.

In my first speech as the Executive Director of Dress for Success, I proclaimed I am my grandmother’s wildest dream. Because that driven, feisty, 5’1 daughter of rural West Virginia was so poor as a little girl, she wore burlap sacks as shoes in the winter, never dreamed that her granddaughter would be presented, and graciously accept the opportunity to be a well-educated, well-respected community leader who rings the bell of empowerment for women, to elevate their stories and affect change. Taking on this role came with the responsibility of ensuring that no woman’s story is ever again hidden or ignored.

I know our women’s story because I was our women’s story. I was not always this confident, unflappable, professional woman (who also loves power tools and baking), who empowers other women to take hold of their career development. I had my own struggle, and my own challenges and race was the divider and hider at many points in my life. I lived in a low-income, low opportunity area that would have made it easy for me to be a hidden figure.

I joked with a friend recently about how few opportunities for employment existed in my neighborhood and how I became the master of COTA bus routes to get where I needed to go. Most of the jobs I took as a young woman were either downtown or on the west side, because that’s where the #6 bus went! Mobility set my destiny early on.

But, while in college and in my early career, many caring women and men with important positions – who did not always look like me – took notice of my story. All of our women need opportunities and for others to hear her voice, know her worth, and learn her story.

When George Floyd called for his deceased mother before departing earth that day, he might have thought he would become another statistic. Little did he know his death would be the catalyst for the most widespread civil rights movement in history.  From Australia, to Great Britain to British Columbia, the world is coming together as a result of his death in a way that makes me hopeful.

Hopeful, because I know there are countless untold stories and crises women of color are facing similar or related to George Floyd, Breonna Taylor, Sandra Bland, and others. As a world, we are bringing forward stories and driving change in a way that makes me hopeful about what is to come.

Our world is changing. As it does, I will continue to raise my hand, use my voice, and operate in my personal and professional calling – to ensure that there are no longer women who are hidden figures. My voice with your voice creates even more lasting and sustainable change. We must do this together. I invite you to join me in the movement.