Though not many people think of Ohio as a vacation destination, the Buckeye state has many unexpected getaways to offer those in need of an escape. Once such example is Landoll’s Mohican Castle, a hotel and event facility nestled in the hills of Ashland County.  It looks like something out of a European dream with the castle positioned at the top of a gently sloping hill. As visitors approach, it dominates their views and captures their imaginations. 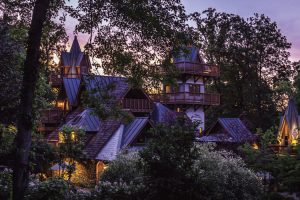 The property feels like something plucked from the pages of a history book, and it has something to offer everyone who visits. The main building was originally converted from a barn that sparked owner James Landoll’s imagination, and the facility has expanded in recent years to accommodate weddings and other larger events.  It opened for business in 2002 and has seen thousands of visitors from all over the country.

The castle was featured on the season finale of Gordon Ramsay’s TV show Hotel Hell in July. The episode included the reorganization of the castle’s restaurant, The Copper Mug Bar and Grille, which now oﬀers an exquisite range of foods that are often made from locally-sourced ingredients. “The premise of the show was to give my mother a break,” says Jimmy Landoll, general manager and son of the co-owners. “The manpower wasn’t here, so we hired people, and we’ve implemented most of the recommendations from Gordon Ramsay and his production team. We’re really a world-class facility now, and we’re having our best year ever.”

Bridal couples are now oﬀered an exquisite menu with varying meal options that are not only appetizing in appearance, but wonderful in taste. The restaurant has the capacity for other events as well, such as business dinners and seminars, providing the ideal mix of atmosphere and excellent cuisine. 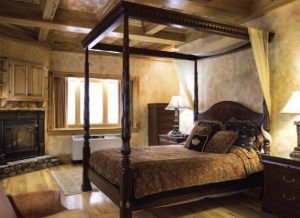 The fifteen suites and two cottages were each hand designed to meet James Landoll’s European-inspired vision, “and we are in the beginning stages of adding a new building where we want to have fourteen more units,” Jimmy Landoll says. Each room in the castle is named after a family ancestor and features unique furnishings and themes as well as lavish bathrooms and kitchenettes. The hand-painted walls alone took seven months to complete, and many of the furnishings were imported from Europe to help enhance the au-thentic feel of the castle. The family also paid tribute to the land around them through the woodwork in the castle, all of which was gathered and milled from local trees.

Each detail of the castle property was thoughtfully crafted, but none captures the hearts of guests quite like the tower. It was James Landoll’s special touch that really transformed the original property from a barn into a European castle, since no one thinks of a castle without a tower. Featuring a spiral staircase to the top and a spectacular 360-degree deck, the tower is the focal point for everyone who visits, no matter their age.

Aside from the beautiful facilities, Landoll’s Mohican Castle also has options for those who seek to immerse themselves in nature. There are many thoughtfully created gathering spots on the castle grounds, in-cluding patios, decks and pathways along their terraced landscaping. 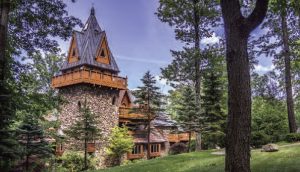 Hidden away in the depths of the state, Landoll’s dream retreat has something for everyone. Whether guests are seeking an escape from the city or a step back in time, the combination of what Landoll’s Mohican Castle oﬀers makes it the ideal destination for the adventurer in all of us.