She had no symptoms, really, just bloating that she attributed to getting older. So when Sarah went in for her annual gynecological appointment on a Thursday back in February 2014, she just thought it was going to be a routine check-up. Just a little over 2 weeks later, she would find herself waking up from very invasive surgery, trying to wrap her mind around her diagnosis.

Sarah Eagleson has stage 3 ovarian cancer. She is in remission for her fourth time. She wants you to know her story and how it may help you.

Sarah had not had an annual physical for a few years. She scheduled her appointment with her gynecologist, and it was during her breast exam that he discovered a small lump. He thought it should be checked out for cancer. The following Monday, her doctor called her to tell her that her mammogram was clear, but her pap results were questionable. She needed surgery immediately — Monday to be exact.

During surgery, an immediate analysis of Sarah’s tumor tissue revealed that it was stage C3 ovarian cancer. Her doctor proceeded to perform a debulking operation – the standard surgery for ovarian cancer. He removed the tumor along with Sarah’s ovaries, uterus, lymph nodes, and all evidence of cancer that he could see. According to Sarah, “They never knew if they got it all.”

When she woke up with her husband, Bill, and her doctor by her side, she learned that she had had very invasive surgery to save her life and needed chemotherapy. She also discovered that she was a carrier of the BRCA1 gene. Her recovery took seven months. She did not tolerate the chemo well, and she ended up losing 35 pounds. Her journey to survive was just beginning.

During her initial recovery stage, Sarah could think of nothing else but her recovery. She was very sick from chemo and felt down, but one thing perked her up — her real estate business and connecting with her clients. With thirty years in the real estate business, Sarah was her team’s leader, and as she puts it, with “a super servant” mentality. 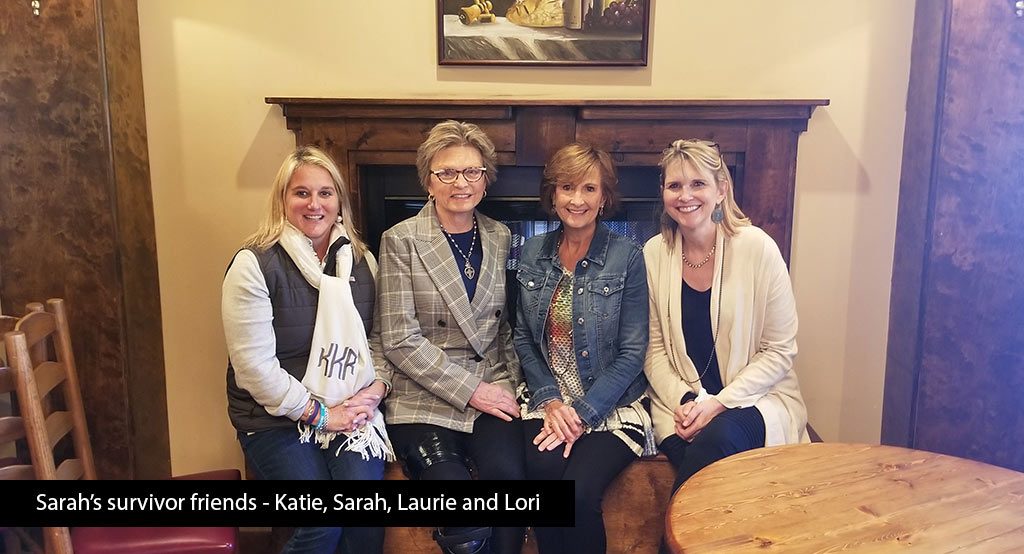 “My husband always laughed about my being out of it, but then I would perk right up when a client called,” Sarah remembers. As co-owner of Keller Williams Classic Realty Properties in Upper Arlington, Sarah was not used to not being involved with her successful business. “I work with wonderful people who back me up and take care of business,” she says.

Sarah remarked that one of her favorite sayings is that “‘People don’t remember what you said, but they do remember how you made them feel.’ Everyone is important and we should treat all people with importance.” Ironically, it was a cancer patient named Laurie whom Sarah met at The James who changed her perspective on her illness and propelled her to do more. “Laurie told me that no one can tell you when you are going to die. Only God can do that. And that was the catalyst that turned my thinking around.” 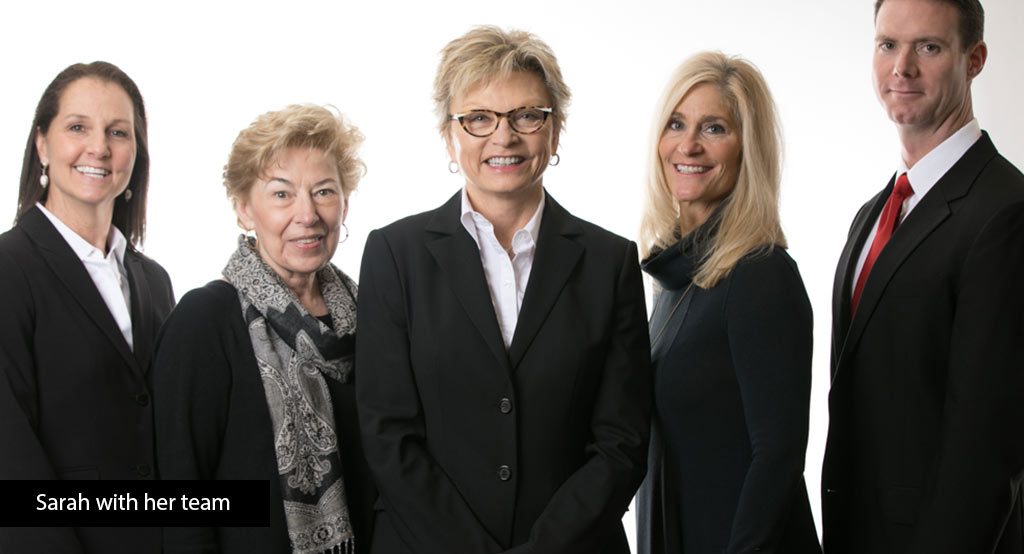 Numerous rounds of chemotherapy and radiation helped get Sarah into remission. And then the cancer came back. And she fought it. And it came back again. And she fought it again. When a new, unrelated tumor metastasized on her brain stem, she fought that too. The treatment, while successful, left her with some double vision and numbness, and she delicately walks with a leg brace. “A big lesson I learned is that disability does not stop you from doing what your mission is. You don’t have to jump over hurdles to sell real estate,” she says with a smile. 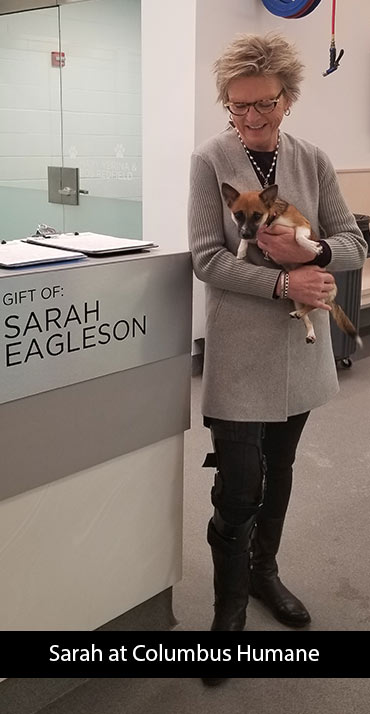 While she did not ask questions about her illness of her medical team early on, she did do some research on her own. Sarah’s advice is: “Don’t Google it. Don’t research it. I chose to pick my own news.”

She is also adamant that women shouldn’t skip any doctor appointments, that they should ask questions and not take any symptoms for granted. “Cancer patients should take a friend or family member with them to the doctor to ask questions, to take notes and to learn about their disease and options.”

Sarah took her philosophy and her philanthropy to the community who so generously gave to her — the healing community at The James. With her cancer in remission and feeling grateful for health, Sarah decided to help other women with ovarian cancer through advocacy, public speaking and volunteering at The James Cancer Hospital.

As a James Ambassador, she tries to spread the message to others about the often-overlooked signs of this disease, including BRCA gene testing. “You know, that is what Angelina Jolie and I have in common…the BRCA gene mutation,” she jokes.

And what does she want to impart to her audience? “I think that speaking to a woman who has been through it and continues to survive gives people a lot of hope.

It has been a cathartic and rewarding experience for me to talk about my cancer, and I hope my story will generate a greater awareness about the disease for women of all ages.”

The BRCA gene test is a blood test that uses DNA analysis to identify harmful changes (mutations) in either one of the two breast cancer susceptibility genes — BRCA1 and BRCA2. People who inherit mutations in these genes are at an increased risk of developing breast cancer and ovarian cancer compared with the general population.

According to Dr. Ritu Salani, a gynecologic oncologist with The Ohio State University Comprehensive Cancer Center — Arthur G. James Cancer Hospital and Richard Solove Research Institute, “What is important is that the person at high risk — whether it was due to a strong family history of cancer or a personal diagnosis of certain cancers, including ovarian cancers — get genetic testing.”

The BRCA gene test isn’t routinely performed on people at average risk of breast and ovarian cancers. In some cases, other sample types are collected for DNA analysis, including saliva. If you have a family history of cancer and are interested in pursuing a saliva DNA test, discuss this with your doctor. He or she can refer you to a genetic counselor who can determine the most appropriate sample type for genetic tests based on your family history. (Credits: Mayo Clinic and The Arthur G. James Cancer Hospital and Richard Solove Research Institute)

Symptoms of ovarian cancer include:

These symptoms can be caused by many conditions that are not cancer. If they occur persistently for more than a few weeks, report them to your health care professional.